Although I have not been posting I have been sewing.  I am at present testing the Style Arc patterns for fit for MY body having heard so much positive about them on Stitchers Guild and in the blogging world.  I ordered the Adele Tunic Top, Wendy  & Linda Stretch Pants and received the Ada Knit Top as the freebie.  It's a wonderful marketing ploy to offer the freebie pattern and I had to restrain myself last month for purchasing a pattern just to buy the Jodi pants freebie.  I am not sure that I will be able to resist this months Katherine Top that is offered, it is just too cute and could figure in my summer wardrobe.  But I digress, back to trying the patterns.

I made the Adele up in a stretch poly which was in similar weigh to that suggested and found that it fitted very nicely across the bust and shoulders.  I need to add more room for the biceps but reading the posts about this it seems it is a common problem, so now to try with a 'real' fabric (I cannot wear poly's as the build up of static produced turns me into a electrode that shocks me every time I touch earth or metal.) 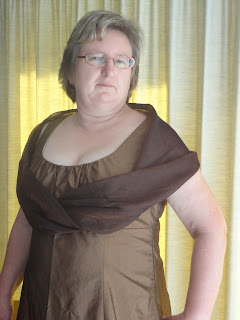 In the meantime I did some fantasy sewing; fantasy in that it is a ball gown and I am unlikely to ever go to another ball.  Initially I was to go to the Leaver's Ball with DH and son, son was not the problem he was vaguely pleased that we were interested ( the school is trying to encourage parents to participate).  However the DH was not keen and on the night had something else to do.  Never mind I have completed the gown and I am very pleased with it. It is from Burda Plus Autumn/Winter 2011 magazine model 426 made in a size 50.  The material is a bronze shot silk with a metallic chiffon wrap. Both pieces came from the stash and were part of a magnificent Michael's bundle I bought many years ago.  I was drawn to this pattern because of the wrap detail - I do not like baring my arms and thought this was a pretty solution.  I measured the pattern but did not make a test garment and it worked! This dress fits like a dream. 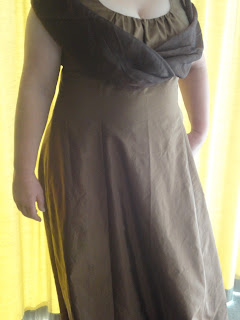 I did not follow the instructions as the photos in the magazine of this dress, and the variations show the shoulders twisted  and the gathers at the bust did not look very good.  I was very careful to make sure straight grain and bias were matched - the bodice has multiple layers. It took awhile to make but the end result is IMHO fabulous!! So if ever I need a dress I don't need a fairy godmother!!